THE VIEW FROM THE BENCH: Hear from top Judicial figures 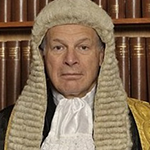 David Edmond Neuberger, Baron Neuberger of Abbotsbury is an English judge. He was appointed a High Court Judge, sitting in the Chancery Division, in 1996, where he tried a number of cases involving financial and commercial contractual disputes, revenue law, company law, insolvency law, IP law, professional negligence and property law. In 2004, he was made a Lord Justice of Appeal, and appointed Judge in charge of IT and modernisation. In 2007 he was promoted to be a Law Lord and became a peer. He was a Lord of Appeal in Ordinary until the House of Lords’ judicial functions were transferred to the new Supreme Court in 2009, at which point he became Master of the Rolls, the second most senior judge in England and Wales. Lord Neuberger became the President of the United Kingdom Supreme Court, a position from which he retired in 2017. Since 2010, Lord Neuberger has been a Non-Permanent Judge of the Hong Kong Court of Final Appeal.


Mr Justice Zervos was appointed a Judge of the High Court of Hong Kong in 2013. After which he joined the Special Prosecutor’s Office responsible for the investigation and prosecution of large scale revenue frauds. He was the Deputy and then the Director of Public Prosecutions of Hong Kong from 2008 to 2013. As head of the prosecuting authority, Mr Justice Zervos introduced a number of initiatives and reforms to enhance and improve the criminal justice system in Hong Kong. He was instrumental in fostering greater cooperation and exchange between other prosecuting authorities both regionally and internationally. He promoted greater transparency and accountability of the prosecution service and published a prosecution code with a stated commitment to human rights and a comprehensive set of guidelines in handling cases, including specific reference to domestic violence, human exploitation and public order.

Register today to obtain a complete picture of the legal changes, tactics and strategies for civil fraud litigation involving an Asian element, and be sure to reap the opportunities that exist for recovery of fraudulently obtained assets.

“The conference has been a mind-blowing event which is intensively interesting that I thoroughly enjoyed.”
Simon Bai, ChenYi Law

Sunday, 24 June 2018 19.00 FIFA WORLD CUP 2018 GAME Viewing Party England vs Panama With the biggest event in football set to dominate this summer’s talks, expectations are sure to run wild! Hunker down with newcomers and old friends to watch the day’s action at the Globe Bar

Given the obvious popularity of the game we recommend that all guests ensure they are in the Globe bar by 7/7.15 pm at the very latest.

By invitation only. Places are limited. For further details and information please contact Anita Arthur at A.Arthur@C5-Online.com or call 00 44 2078786925

View the highlights of our sold out event in Geneva: