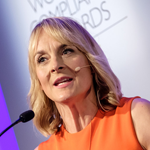 Louise Minchin is a hugely respected, and well-known journalist, broadcaster and TV presenter. She currently presents Breakfast on BBC One, the UK’s most watched morning TV programme, with over six and a half million viewers a day.

She is also a guest presenter on The One Show on BBC One, and Your and Yours, the BBC’s consumer programme on BBC Radio 4, and has also presented programmes on Radio Five Live and BBC Radio Two. Before joining Breakfast full-time in 2012 Louise was one of the main anchors on the BBC News Channel, and a regular presenter of the BBC One O’clock News.